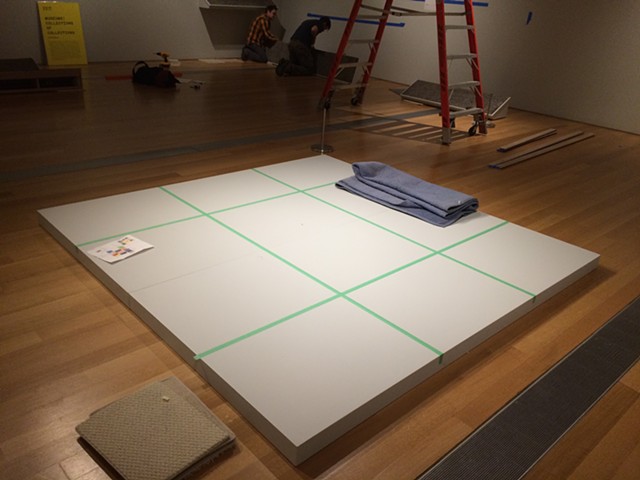 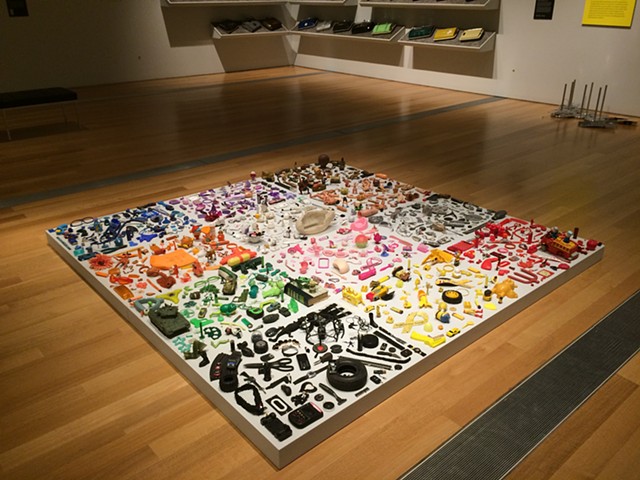 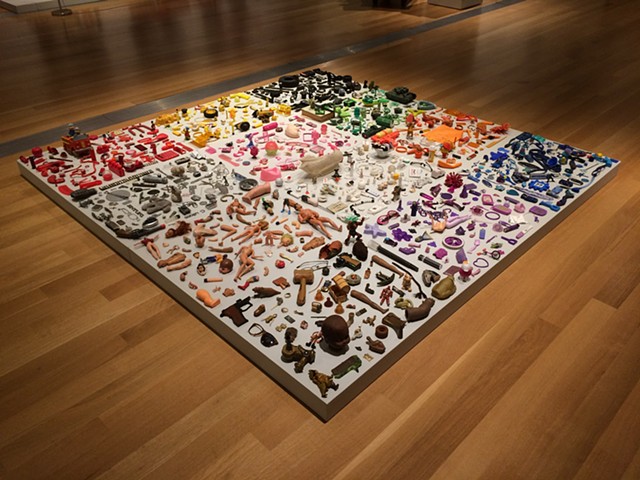 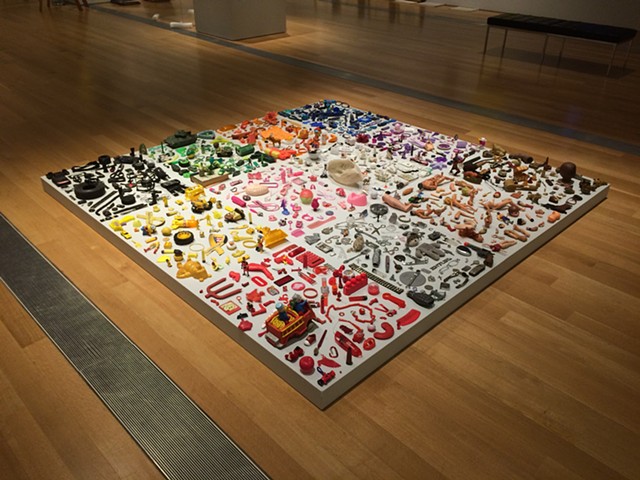 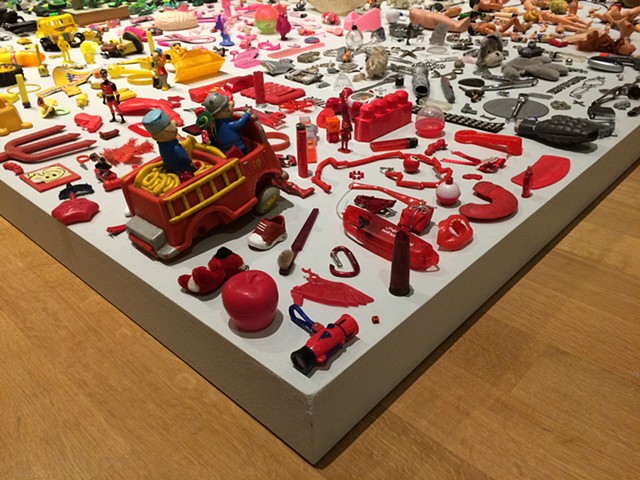 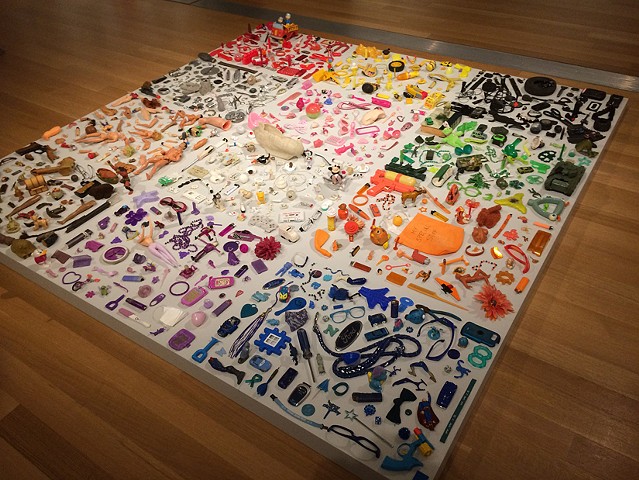 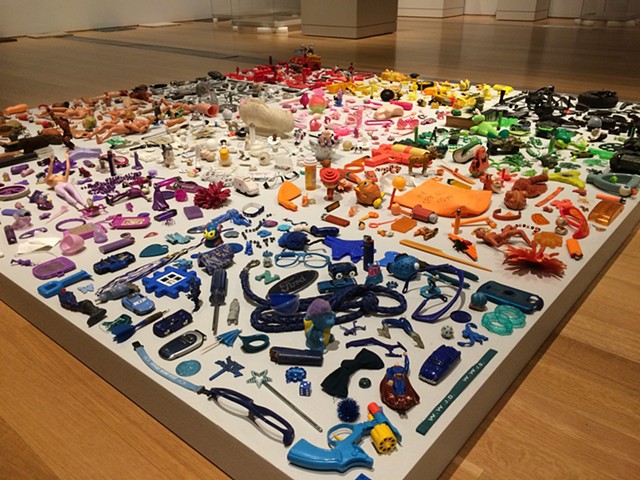 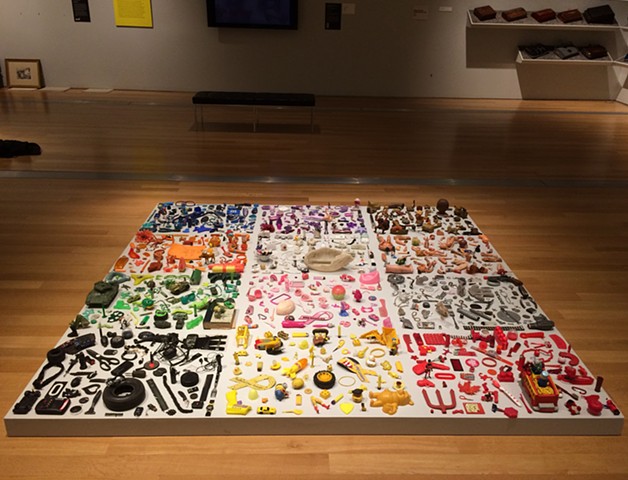 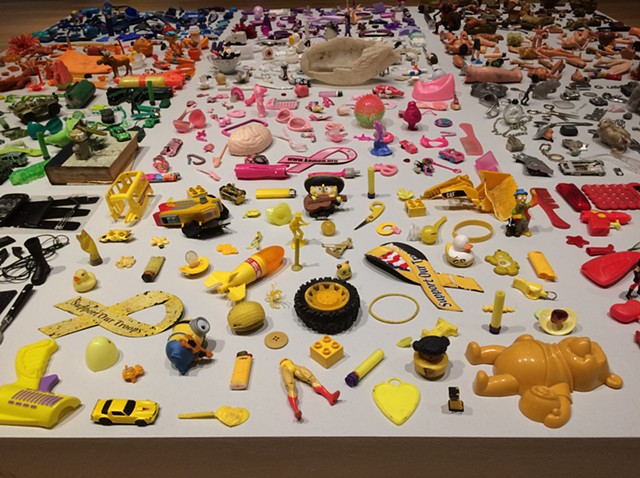 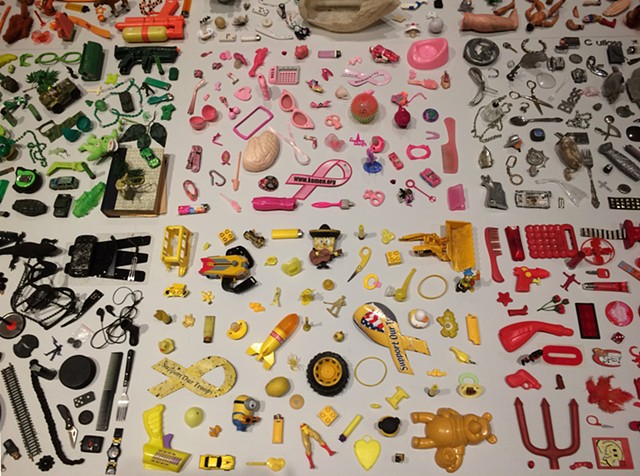 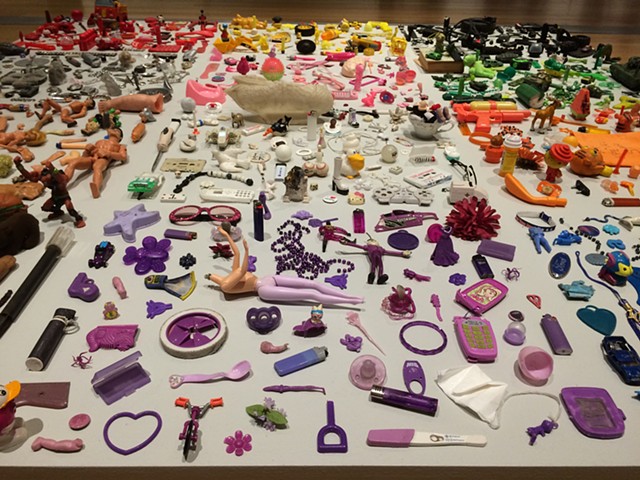 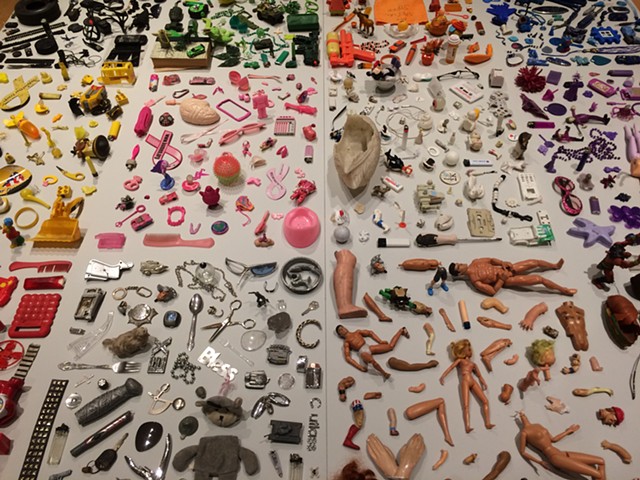 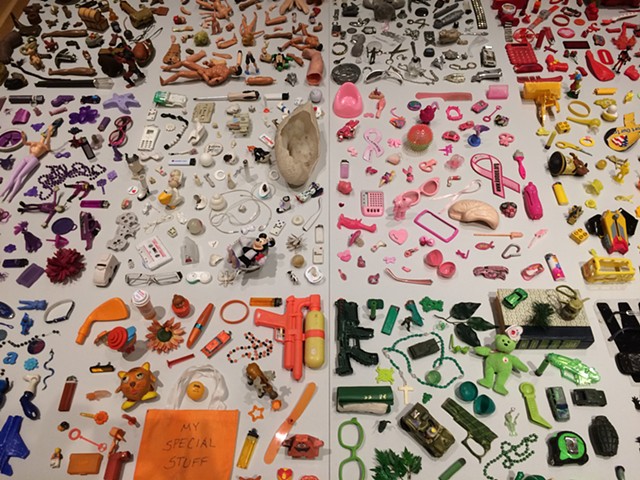 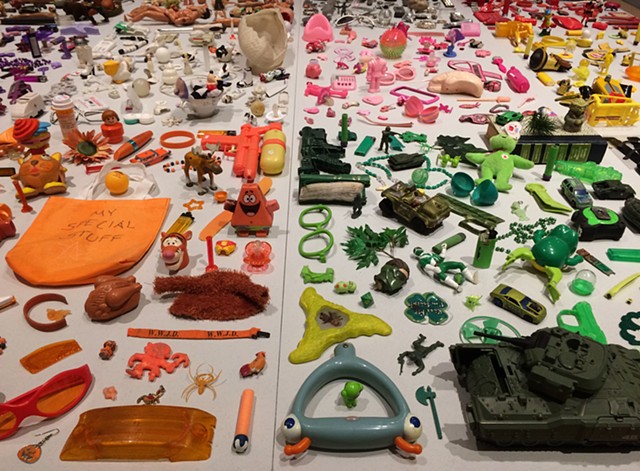 Below, my responses to a questionnaire administered by GRAM curator, Ron Platt:

1. How would you characterize what you pick up?

This collection is comprised of thousands of “artifacts” I have recovered from the streets of Grand Rapids while walking, running, or riding my bike. Initiated in 1998, it represents more than a decade in the history of our city or, more specifically, our material existence.

2. How would you describe your role in relation to these objects?

Hunched over my handlebars or watching the pavement pass beneath my feet, I am a pseudo-anthropologist, contemplating who we are through our lost and discarded (objects)/refuse. 3. What do you think these objects say about our culture?

Broken toys, lost sunglasses, disposable lighters, auto fragments and other detritus reflect our societal interests and values, our relationship to litter, and the fickle sensibilities of popular culture. 4. Which one of these “collector categories” would you put yourself in and why? a. The Seeker b. The Historian/Researcher c. The Hobbyist d. The Fan e. The Group Participant (subcultures/counter-cultures/enthusiasts) I would locate myself somewhere between Historian and Seeker. There is a strange inevitability when one undertakes a project such as this: garbage becomes precious, or at least some of it does. Even objects abandoned on the street assume value through the act of collecting, which privileges certain things over others. My quest for particular rubbish fills every journey with the promise of riches.

ADDITIONAL: The first object that I recovered from the street with the intention of keeping and sharing with others was a small, green Gideon bible that I spotted in a snow bank. It had been rolled up tightly and bound with a rubber band. Because it had been wet and then frozen, long after the rubber band degraded and snapped, the bible retained that unusual form, pages grafted together, tightly curled and inaccessible. It struck me as such a curious, poetic thing, so profoundly out of place amid all the wrappers and bottle tops and fast food wrappers. It’s possible that the father of Surrealism, Andre Breton, might have described this as an “involuntary sculpture”.

Soon after, I found another odd book lying in a park, a hardcover volume of Reader's Digest Condensed. A square-shaped recess had been carved out of the inner pages, as if to serve as a secret chamber. One of the stories collected in this volume was entitled, “Cannibals of the Heart”. Again, so strangely poetic. I was inspired to become increasingly vigilant on my runs, the scope of my seeking widened to include a blonde wig, a class ring, a used home pregnancy kit…objects charged with narrative. For every lost bit of jewelry or smashed mobile phone, there were a dozen dismembered action figures and shattered pairs of sunglasses.

Soon I began to recognize patterns, or sub-groups forming within my larger collection: toy figures and weapons, hair accessories, car fragments, small electronics, pacifiers and pill bottles. As these smaller collections grew, “finding” became a highly compelling activity for me. To borrow a phrase from the renowned American artist/educator Buzz Spector, I aspired to become a “skilled noticer”, expanding my archive while simultaneously extracting meaning - sometimes metaphorical, sometimes anthropological - from all that I found. These are the objects that reflect attitudes toward our physical environment, trends in our consumption, and the values of our culture.