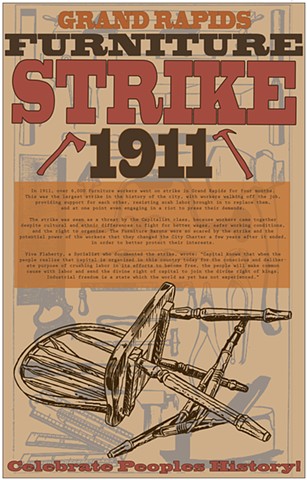 In 1911, over 6,000 furniture workers went on strike in Grand Rapids for four months. This was the largest strike in the history of Grand Rapids, with workers walking off the job, providing support for each other, resisting scab labor brought in to replace them, and at one point engaged in a riot to press their demands.

The strike was seen as a threat by the Capitalist class, because workers came together despite their cultural and ethnic difference to fight for better wages, working conditions, and the right to organize. The Furniture Barons were so scared by the strike and the potential power of the workers, that they changed the City Charter a few years after it ended, in order to better protect their interests.

Viva Flaherty, a Socialist who documented the strike, wrote: “Capital knows that when the people realize that capital is organized in this country today for the conscious and deliberate purpose of crushing labor in its efforts to become free, the people will make common cause with labor and send the divine right of capital to join the divine right of kings. Industrial freedom is a state which the world as yet has not experienced.”