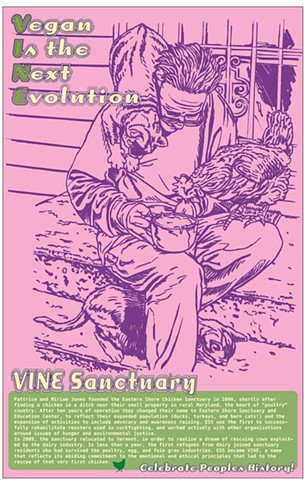 Pattrice and Miriam Jones founded the Eastern Shore Chicken Sanctuary in 2000, shortly after finding a chicken in a ditch near their small property in rural Maryland, the heart of “poultry” country. After ten years of operation they changed their name to Eastern Shore Sanctuary and Education Center, to reflect their expanded population (ducks, turkeys, and barn cats!) and the expansion of activities to include advocacy and awareness raising. ESS was the first to successfully rehabilitate roosters used in cockfighting, and worked actively with other organizations around issues of hunger and environmental justice.

In 2009, the sanctuary relocated to Vermont, in order to realize a dream of reducing cows exploited by the dairy industry. In less than a year, the first refugees from dairy joined sanctuary residents who had survived the poultry, egg, and foie gras industries. ESS became VINE, a name that reflects its abiding commitment to the emotional and ethical principles that led to the rescue of that very first chicken.