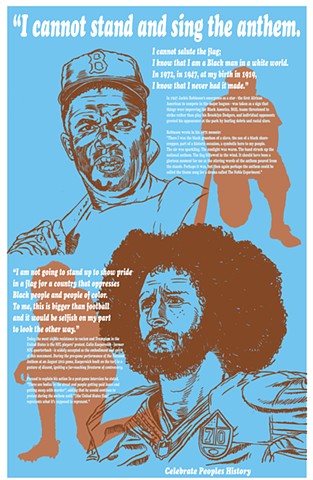 In 1947 Jackie Robinson’s emergence as a star - the first African American to compete in the major leagues - was taken as a sign that things were improving for Black America. Still, teams threatened to strike rather than play his Brooklyn Dodgers, and individual opponents greeted his appearance at the park by hurling debris and racial slurs.

Robinson wrote in his 1972 memoir: "There I was the black grandson of a slave, the son of a black sharecropper, part of a historic occasion, a symbolic hero to my people. The air was sparkling. The sunlight was warm. The band struck up the national anthem. The flag billowed in the wind. It should have been a glorious moment for me as the stirring words of the anthem poured from the stands. Perhaps it was, but then again perhaps the anthem could be called the theme song for a drama called The Noble Experiment.”

"I am not going to stand up to show pride in a flag for a country that oppresses Black people and people of color. To me, this is bigger than football and it would be selfish on my part to look the other way."

Today the most visible resistance to racism and Trumpism in the United States is the NFL players’ protest. Colin Kaepernick - former NFL quarterback - is widely accepted as the embodiment and spirit of this movement. During the pre-game performance of the National Anthem of an August 2016 game, Kaepernick knelt on the turf in a gesture of dissent, igniting a far-reaching firestorm of controversy.

Pressed to explain his action in a post-game interview, he stated, “There are bodies in the street and people getting paid leave and getting away with murder", adding that he would continue to protest during the anthem until "[the United States flag] represents what it's supposed to represent.”