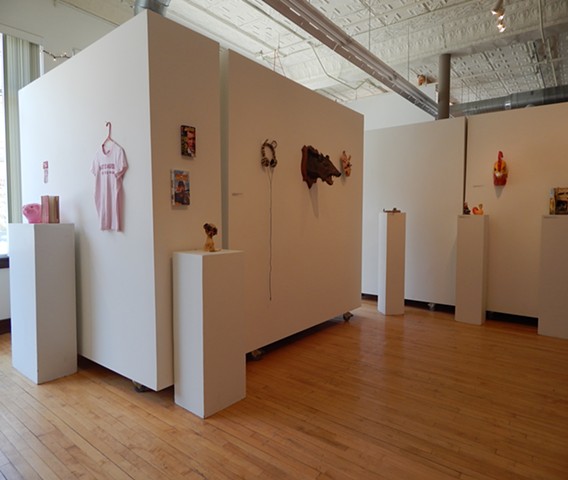 Putting It All Together, gallery view
< previous next >

Speciesism 1. A belief that different animals are significantly different from one another in their capacities to feel pleasure and pain and live an autonomous existence, usually involving the idea that one’s own species has the right to rule and use others. 2. A policy of enforcing such asserted right. 3. A system of government and society based upon it. - from Marjorie Spiegel, The Dreaded Comparison: Human and Animal Slavery

We live in a speciesist reality. Like racism, sexism, heterosexism and other systems of oppression, speciesism has been socially constructed and is perpetuated by/for those invested in retaining power and privilege through such a system. The means for transmitting (and naturalizing) a speciesist ideology from generation to generation are omnipresent, but nearly invisible to the uncritical eye. They include our childhood toys and television shows, textbooks, the way we talk, holiday traditions, natural history museums and other cultural institutions, and the never-ending ad’ campaigns that compel us as consumers.

Putting It All Together is a collection intended to bring us into immediate confrontation with our human propensity for speciesism, past and present. The objects assembled here speak directly to both our ignorance and our unwillingness to peer - beyond our human privilege - at the sad experience of the billions of other animals we needlessly oppress.

Look around you at the material evidence of our speciesist ideology:

Unflattering representations of other animals as dull-witted buffoons, anthropomorphized through undignified costumes and clumsily engaged in human activities; games and videos that celebrate acts of human violence toward other species; guides to the mutilation and consumption of dead animal flesh; the hollowed out husks of once-living beings, presented as trophies and scientific curiosities; a glut of toys designed to prepare young people for their prospective roles in the future exploitation of farm animals; clay, plaster and plastic animal likenesses, their bodies dismembered or distorted in some way. And more.

Seeing other species clumsily imitating our human behaviors reinforces the idea that they are less able, less intelligent, and therefore less worthwhile than humans. Their clownish depictions alleviate human guilt about animal suffering and exploitation, and suggest that non-humans do not experience pain in the way we experience pain. The “Whac-A-Mole” game and its cousin, “Gone Fishin’”, are overtly violent. One needn’t be a psychologist to understand the connections being made. Not coincidentally, games that use other animals as targets are popular in a time and place when killing other animals for pleasure and profit is status quo.

If one were to studiously design a program for the storage and transmission of our speciesist ideology, it would look a lot like the contents of this exhibition.