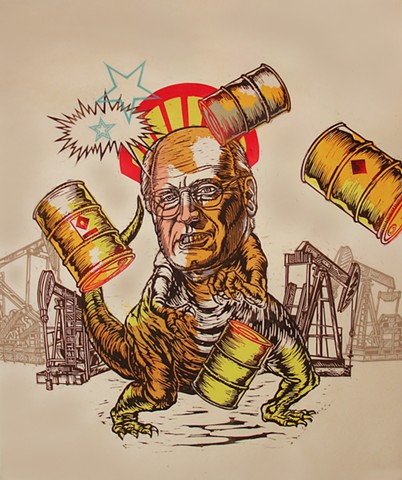 My studio practice consists primarily of printmaking, most commonly relief techniques. Individual blocks carved from wood or linoleum are hand-printed, overlapping with one another in order to produce more complex compositions. I am currently working with a collection of over nine hundred images. By employing stencils and masking shapes cut from newsprint, I am able to form nearly limitless relationships between these blocks each time I print.

Though printmaking is defined in part by its ability to produce multiple, unchanging impressions from a fixed matrix, I am more interested in the potential for variation and combinations of imagery. Working in the modular fashion I’ve described above exploits qualities intrinsic to the medium, such as the ability to alter color or composition from impression to impression, in relatively simple ways that can dramatically transform meaning. I am also interested in connecting to the long heritage of woodcuts and screen-printing (among other print processes) in the service of propaganda. As an activist, I deliberately produce images within this conceptual-historical framework.

The content of my recent imagery is overtly political, or to be more precise, political satire. Over the past seven years the presidential administration has designed and implemented a foreign policy platform that bears eerie resemblance to the pulp fantasy of my youth, replete with simplistic heroes, villains, and its own specialized vernacular (weapons of mass destruction, targets of opportunity, freedom fighters, spider holes.) Our elected officials speak in a bombastic rhetoric of “good and evil”, declaring our global neighbors “with us or against us”, our nation’s opposition “wanted dead or alive.” Unsurprisingly, Bush’s agenda (and hyperbole) has elicited harsh scrutiny from the international community. As a conscientious citizen of the United States I am ashamed by this concern and share in their critique.

As a printmaker, my vehicle for protest is obvious. For this series of works - the WoMDs - I have adopted a strategy from the president himself, reducing the vast complexities of global conflicts into flattened, cartoon abstractions.