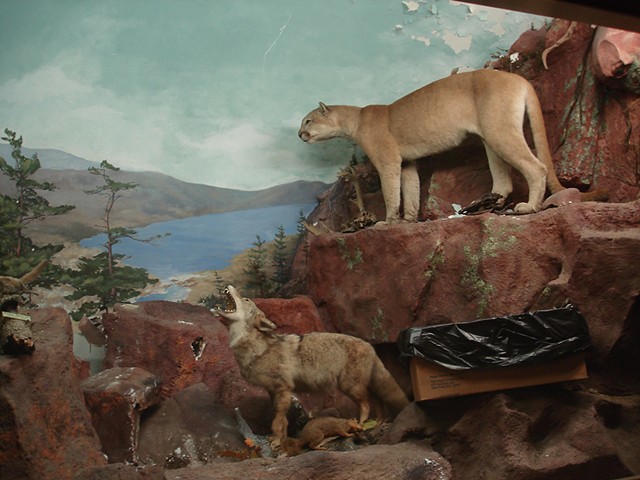 Involuntary Sculpture: Cougar and Coyote
next >

Vitrine curated for the event Michigan: Land of Riches.

Borrowing a methodology from the Surrealists, I present this diorama just as I discovered it - a readymade space (or readyspace), imbued with new meaning through its shift in context.

During an initial visit to the long-vacated areas of this museum, I was inspired by the crude, decomposed condition of many exhibits, particularly in the MAMMALS area, where dioramas had been partially deconstructed (over ten years ago) and left in a state of transitional disarray.

Amid the aging taxidermy, peeling paint, and cracked plaster there are many vivid – if unintended – narrative interpretations available. Some exhibits suggest the tenuous relationship of humankind to the “natural world”, while others reflect the volatile relationship of this museum (and others like it) to its own historic practices regarding acquisition and display.

If one accepts their incidental qualities as purposeful, each of the museum’s “abandoned” exhibits abounds with narrative possibilities.

It was initially tempting to add visual elements that would emphasize what I perceived as the sorrowful story of this particular scene. Ultimately the most poignant act I could conceive of was simply not to intervene, but to preserve the display as I found it, “framing” (with this text) the deterioration of the sky, the cry of the coyote, the advent of an ominous cardboard box lined with a black bag and its mysterious contents. One can quite easily imagine - just beyond the frame - boxes and black bags of a larger size, suitable for cougar and coyote.

This tableau illustrates a story of nature seldom told in the context of a museum: a grim, cautionary tale regarding the endangerment of wild habitats, the displacement of other living species due to human intervention, and the fragile ecosystems that persist beyond the edges of our incessant suburban development.

Considered from an alternate vantage point, this diorama (and similar exhibits populated by the inanimate husks of once-living creatures) speaks to shifting institutional attitudes regarding the extraction, isolation and recontextualizing of specimens from the natural world, and the artifice of installing them in an idealized – but ultimately morbid – state. Here time and neglect have ruptured that ideal; a thick layer of dust mats the fur of the deteriorating specimens, the paint is flaking from their illusory habitat.

Our relationship with other living creatures and resources of the world is an unstable one, rendering any history we studiously construct for ourselves subject to rapid, radical change. Indeed, it is this volatility which renders our visits to cultural repositories like this museum such a rich experience.

I am genuinely grateful to those entrusted with the preservation and profile of this museum for permitting us access to those less tidy aspects of institutional transition often kept concealed, and their willingness to make several such aspects available for public display.